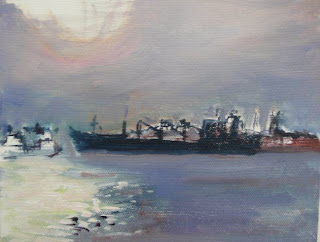 Yesterday in still too rare sunshine I took a walk down to Yenikoy to one of my former favourite sketching hang outs. Recently closed down Emek Cafe usually a bustling sea side breakfast and tea garden, is no longer there. All is quiet, umbrellas closed, tables gone, early signs of deconstruction in the cafe wall that used to comfortably contain the softly breaking waves, the hungry fish and not far beyond the passing ships. I'm joined in my reverie by a few overcoated men from the adjoining men's cafe, perhaps also pondering the loss of this formerly lively institution, Emek Cafe, or perhaps not. When the owner, manager? appears by my side? "What happened?" I ask in my still too elementary Turkish? Well, he explains, the neighbour in the rather grand, white yali next door decided to have it closed down. But why? I ask. He doesnt know, he says and adds, rightly, it wasn't noisy, no piped music, not rowdy, no alcohol. He alludes to the long history of the place .And pretty much no chance of it reopening, he says. But this is Istanbul and should i really be surprised, or sad. And a few doors down the far more generic Timothy's coffee shop has just appeared.
A few minutes later he disappears back into the former cafe terrace, and beckons me over the rubble. I go across and he has set up a table with two chairs in a spot in the sunshine. And in a moment a glass of tea appears from nowhere. I thank him and settle in as always, bringing out my sketchbook, and the minutes pass pleasurably and slowly. My tea finished, he brings me another. And when I leave my offer to pay is emphatically denied.
Posted by Diana Page at 08:16