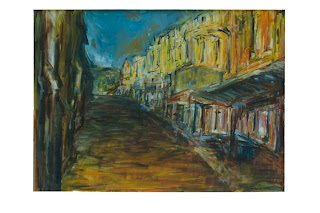 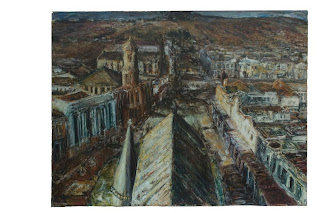 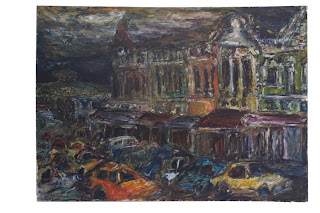 This morning a white ship on a white bosphoros, barely delineated. I grew up in a small town, whose lineaments became as familiar to me as the lines on my hand The silhouette of Makanaskop rising up like a small mushroom cloud at the end of the high street. The row of high street facades:, buildings iced in custard yellow, pistachio green and on the corner, punctuated by a red onion dome which said Russia. Quirky, colonial experiments in rococo trimmings that had nothing to do with the surrounding landscape. The whole town set up like a stage set, even the bank, appearing like some strange Greek temple. The city hall, with its clock tower, trying to recall Big Ben. But my favourite, twirling in the middle of it all, was the High Street Angel, at the time I was oblivious to the fact that this was the memorial to the unknown soldier. Instead she spread her wings upstaging the enormous cathedral behind her, or in the late afternoon sun turning into a black bird against the blazing hillside behind her. Grahamstown, how to describe this place where I grew up to someone from very far away, to give some of an idea of its peculiar capacity for inspiring
delight and dispair in equal measure.
Posted by diana page at 01:18