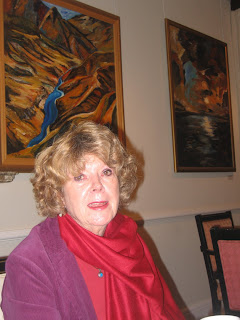 Hibernating at home to update my portfolio. And so to write my biography. Or as my dear ceramicist friend Jane Young said this week " acknowledge your heritage". Like a painting there are many layers to this. My mother Lindsay Page is a painter, a landscape painter who loves Ruskin and mountains. She fought and won in the tradition of the Grahamstown Group, whose champion, Brian Bradshaw (now was he a bully or a genius?) drilled his students in classical drawing, and steeped them in oil paint. Lindsay Page now, in her seventies continues to paint and lives at the foot of a mountain. My father, Bill Page, ten years deceased, was a thinker, a teacher, an extraordinary wit, and incidentally a Psychologist and academic, but never took money from anyone for listening. He was also president of a rugby club. A passion I have yet to develop. But as the mother of a burgeoning young son, anything is possible. My father was also the most courageous person I have ever met, only matched by my mother.
..
Then there was my grandmother, Constance Little (yes the name is true) who while discouraging her youngest daughter, my mother, from pursuing her passion for art, married her own comfortable domestic farm life to her acute powers of observation, and subtle expressions of colour, line and composition in developing the more socially acceptable art of silk embroidery.
The ultimate complement, "almost like a photograph" was often delivered in awe at "The Royal Show" (nearby Pietermaritzburg's agricultural show of everything from beasts to baking) But to my mind at their best, they often went way beyond that. Yes there were the kitschy sequinned fish she did for someone's wedding present, but how could I miss the skeins of silks laid out in fine Cezanne greys next to her table, or the strange Japanese like floating spaces that emerged around her birds. ( Istanbul's ubiquitous tribe of sparrows gather on my windowsill as I write this! )
And then couple to that my mother's flashing brush strokes, as they swept up everything in their path. In Leicester, England, a quad of sweltering sauna visitors left Picasso's De'Moiselle D'avignon looking positively tame! I was 11. The same year we braved traffic, cold and queues to see Max Ernst at the Grand Palais Paris. Not an artist I revisit often, but a terrible imagination and the alchemy of oil paint left its impression. She also introduced me to the painting of Pierre Bonnard who continues to kindle my sensibilities. And alongside my mother I was always drawing.

But at school, acting became my passion and would remain so until, finally having chosen Fine Arts at university, auditioning for an amateur production of "The Importance of Being Earnest" I was told I would have got the part had the male lead been a bit taller, or I shorter! That was the end, of my acting career. Until last year, when I found myself on a rooftop first in Galata Istanbul, then in Brooklyn New York directing actors and singers in an art performance for voices. A project which might just take me back on the road to Damascus. But thats for another blog.

Then there were the Maclennans who lived down the road.
Entering 24 Frances Street, Grahamstown as a child was for me, as for the children in "The lion, the witch and the wardrobe" , a whole new universe peopled by wonderful, occasionally even terrifying characters. I was there to visit Sue my best friend, the youngest and the daughter, but she had three huge brothers, a family of mountaineers which included Don, Sue's father, a poet with twinkly eyes and eyebrows that seemed to still be growing, and a mother, Shirley, who provided my first experience of a warm but booming American voice. At Shirley's dinner table in the evenings, over wonderful meals served on plates later also made by Shirley, artists, writers, musicians, poets and playwrights would gather. And while I listened to many serious discussions about art, politics and poetry, there was always a healthy irreverence and much raucous laughter. I have felt privileged to visit that table with its brightly painted sun for the length of my life.